Click here to view the program for Presto Change-O.
“A Magical Three-Card Monte Musical… enjoyable and entertaining evening… it sent us home with a smile on our face and joy in our heart. Hey, what more can you want for an evening of theatre?” – Berkshire Fine Arts

“Presto Change-O is not a big, loud, gushy musical, but instead an intimate, personal one this is fortunately able to grab you because of the writing and the sparkle of the cast” – Springfield/Hartford Examiner

“Presto Change-O is a Winner. Waggoner and Price have created a ‘magical’ musical”– Berkshire Record

Jenni Barber (Tina) Broadway: Wicked (Glinda); The Nance (Joan); Annie (Grace Farrell); The Performers (Sundown LeMay) and The 25th Annual Putnam County Spelling Bee (Olive Ostrovsky). New York and regional: Private Lives (Hartford Stage); As You Like It and The Tempest (Sam Mendes, The Bridge Project); From Up Here (Manhattan Theatre Club); Paint Your Wagon and A New Brain (Encores!); Oklahoma! (The Muny), and 9 to 5 (Music Theatre of Wichita). Television: Master of None; Elementary; Smash; Law & Order: SVU and the Emmy Award-winning The Electric Company. Graduate of the University of Michigan School of Music.

Jarrod Spector (Michael) Barrington debut! Jarrod was nominated for both Tony and Outer Critics Circle Awards for originating the role of Barry Mann in Beautiful: The Carole King Musical. He previously ended his tenure as Frankie Valli in Broadway’s Jersey Boys after a record 1,500 performances. Other credits: Broadway—Les Miserables (Gavroche); Nat’l. Tours—Les Miserables and Jersey Boys; Off-B’way—Hamlet (Hamlet); Regional—Piece Of My Heart (Bert Berns—NYS&F). Jarrod grew up in Philadelphia, attended Princeton and trained at the Atlantic Theater Company in NYC. Check for concert dates and info on Facebook/twitter/instagram (@jarrodspector), and albums on iTunes. For Kelli, always.

Bob Walton (Arthur) Broadway: The Drowsy Chaperone; 42nd Street (revival); The Ziegfeld Follies of 1936; Once Upon A Mattress; Show Boat; City of Angels. Off-Broadway: I Love You/Perfect/Change; Forbidden Broadway Strikes Back; Preppies. TV: The Good Wife; The Americans; Person of Interest; Nurse Jackie; and Law and Order: SVU. With his brother, Jim, they have written: Mid-Life! (The Crisis Musical); Mid-Life 2! (#What Did I Come In Here For?); Double Trouble (A Musical Tour de Farce); A Day In Gloucester and My Brother’s Keeper. Bob is co-author of the Off-Broadway play Game Show, and also wrote Can You Dig It? Married to Laurie Walton, they have two actor children, Emily and Alex.

Eric Price (Book and Lyrics) has written the book and lyrics to Presto Change-O; Radioactive; Emma!; Hello Out There; Around the World and The Sixth Borough. Eric was the assistant to 21-time Tony Award-winning director/producer Hal Prince and has worked with him on the development and premiere of several new musicals and plays in New York, Chicago, Washington D.C., Tokyo, and London. Eric was a Dramatists Guild Fellow, a member of the Lincoln Center Theatre Directors Lab, and received an MFA in Musical Theatre Writing from NYU. www.ericpriceonline.com

Joel Waggoner (Music) BSC: Southern Comfort. Joel  holds an MFA from NYU’s Graduate Musical Theatre Writing Program and currently works as a composer, performer, vocal coach, musical director and violinist. Joel was a 2012 Dramatist Guild Fellow and his work has been performed in New York at Lincoln Center, 54 Below, Joe’s Pub, and Merkin Recital Hall. He was recently featured as an actor and orchestrator at the Public Theatre in Southern Comfort. www.joelwaggoner.com

Chris Bailey (Choreographer) The Entertainer with Kenneth Branagh (West End, upcoming); Cyrano de Bergerac (Roundabout); Assassins (Menier Chocolate Factory); the Kennedy Center Honors; and the 2013 Tony Awards. Regional credits include Into the Woods; My Fair Lady; Tarzan; West Side Story and Thoroughly Modern Millie (all MUNY); and Dancing Shadows (Seoul Arts Center). Film: Ted 2; Kenneth Branagh’s Cinderella; and A Million Ways to Die in the West. As associate choreographer: Promises, Promises; How to Succeed in Business Without Really Trying; Evita; and Cry Baby (all Broadway); and Guys and Dolls; Evita; and Once in a Lifetime (all West End).

Ken Billington (Lighting Designer) has almost 100 Broadway shows to his credit including such theatre milestones as Sweeney Todd and the longest running American musical in history, Chicago. Other Broadway productions include Amazing Grace; Sondheim on Sondheim; The Drowsy Chaperone and Footloose, to name a few. Many touring productions have included Chicago (worldwide); Riverdance (lighting supervisor); White Christmas and Annie. Other projects: Hugh Jackman in Concert, the Radio City Christmas Spectacular (1979 to 2006), Fantasmic! at Disneyland and New York’s Tavern on the Green. Ken’s many awards include the Tony and the Lumen for his architectural work. In 2015 Ken was inducted into the Theatre Hall of Fame.

Brad Berridge (Sound Designer) Over a dozen shows at BSC. Highlights: The Best of Enemies; The Crucible; A Streetcar Named Desire; To Kill A Mockingbird; The Whipping Man; Pool Boy. Off-Broadway: 13 Things About Ed Carpolotti (world premiere); Loot; Cactus Flower. Locally, many shows at Capital Repertory Theatre; highlights: Gypsy; The God Game (world premiere); A Christmas Carol; Other Desert Cites; The Secret Garden. Brad is an Associate Artist with WAM Theatre and has designed and composed music for nearly all of their local productions. Brad lives in the Berkshires with his wife, Ashley Berridge and their two children.
www.bradberridge.com 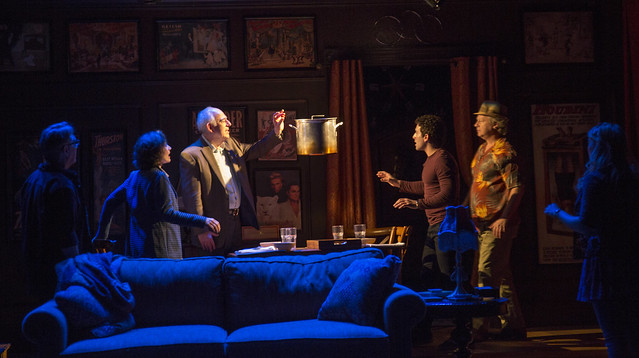 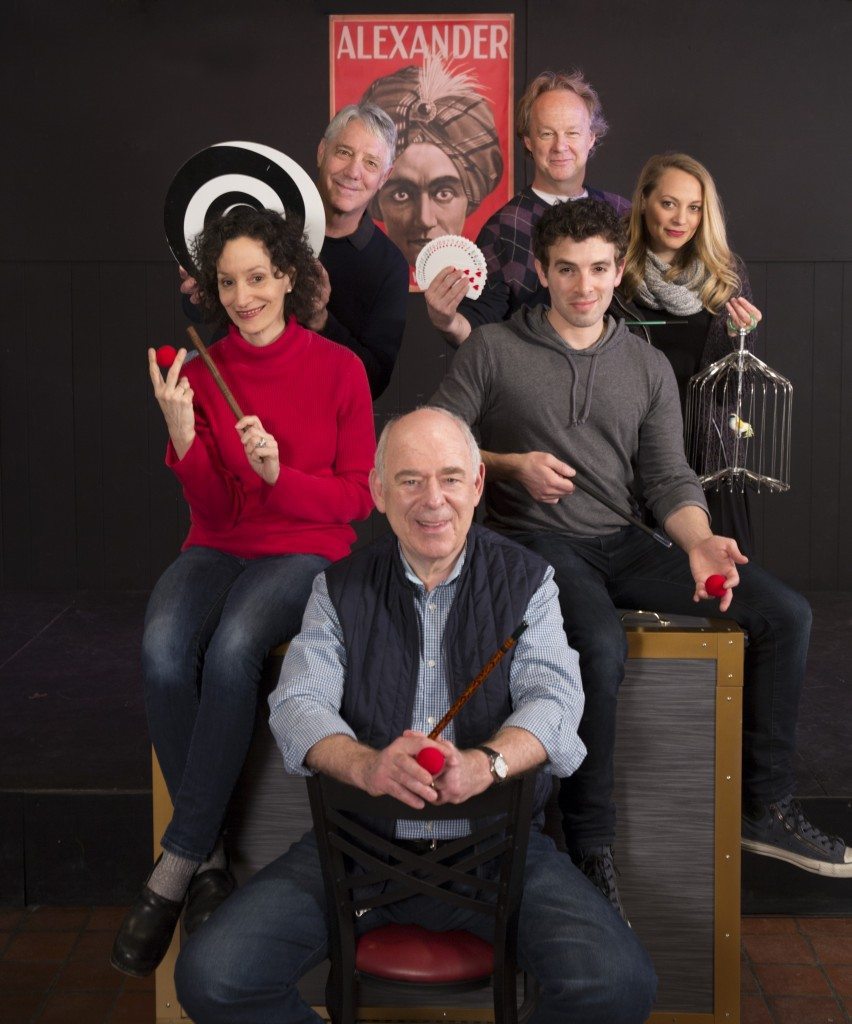 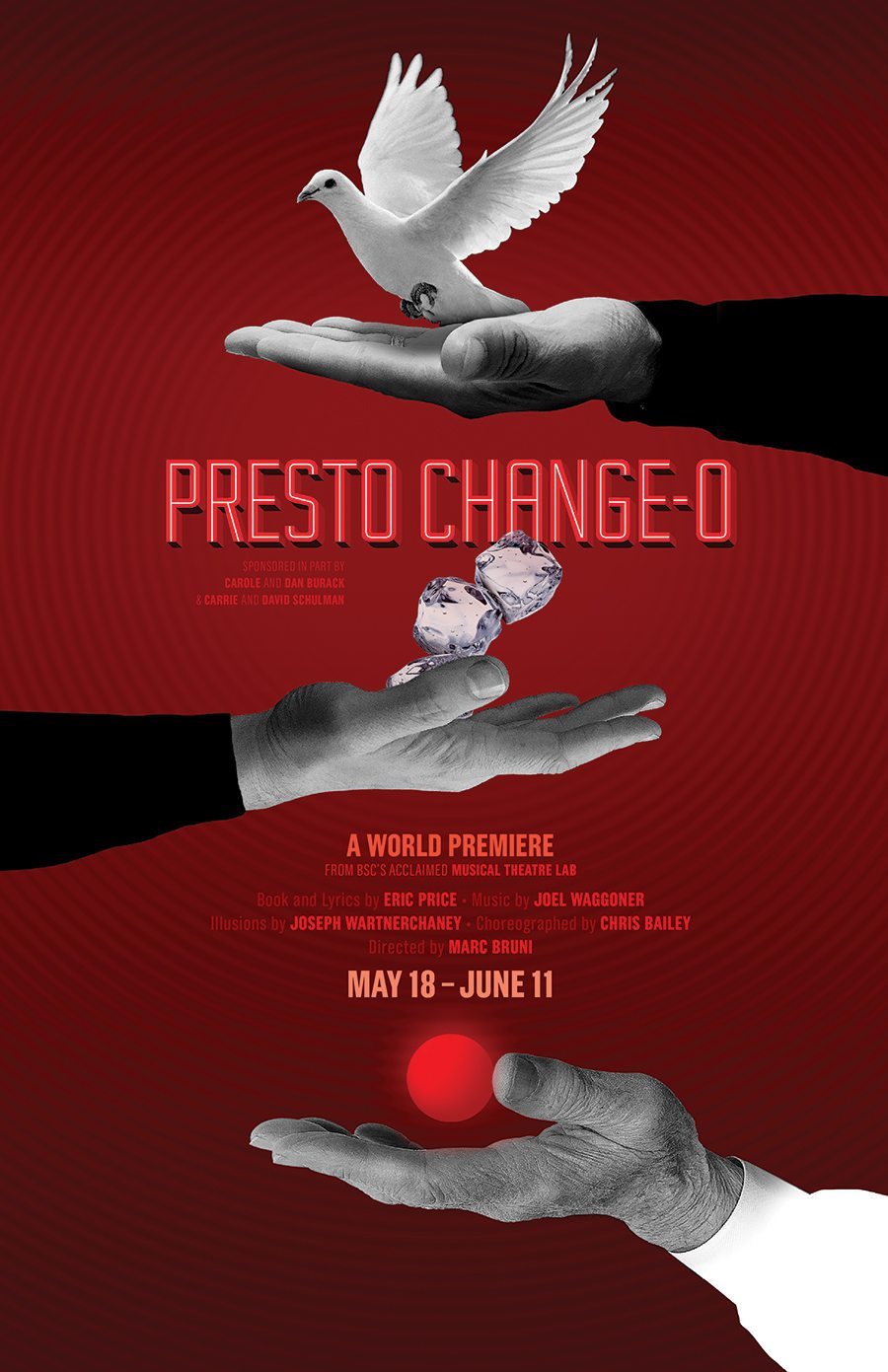 This exciting new musical tells the story of three generations of magicians who find themselves under one roof for the first time in years. When the grandfather causes real magic to happen, they must confront their past mistakes and re-examine what it means to be a family.

Presto Change-O was commissioned through the generosity of Carole and Dan Burack.

The 2016 ST. Germain Season is sponsored by The Claudia and Steven Perles Family Foundation