There’s a new movie slated to open. It’s called Saving Mr. Banks, and it’s about the testy relationship between Walt Disney and P. L. Travers during the filming of the 1964 hit Mary Poppins, starring Julie Andrews and Dick Van Dyke. I loved that Technicolor confection. But the book? That’s something else.

I should probably treat myself to a new copy of Mary Poppins and Mary Poppins Comes Back, by P. L. Travers. But I hold on to my childhood copy, taped and tattered, with my shaky cursive on random pages. Though I couldn’t have articulated this as a kid, even then I sensed the subtext for Mary’s testiness. Here was a smart woman with upper class aspirations, trapped in a class system she could only escape by creating a parallel fantasy universe.

My favorite chapter, “Bad Wednesday”, is the stuff of nightmares. In brief, Jane (I particularly was drawn to Jane; after all, we were both moody and shared a name) is sick of her life and in a fit of adolescent rage, she breaks a decorative plate on the nursery mantelpiece. Instantly, she’s teleported to a weird Regency world: the archetypal rose-covered cottage in the woods and the family that has been waiting for her for a very, very long time.

The Banks home is boring. Yet it’s familiar. The world inside the plate is treacherous. But it sure is tantalizing.

After several weeks, the PMP group is comfortable with Leandra’s physical warm-ups and Jade and Kate’s vocal exercises.

Improvs emerge from Thorns and Roses, the weekly check-in. Betrayal. Breaking up with a boyfriend. The consequences of looking at somebody the “wrong” way. The minefield that can be a walk down a high school hallway. 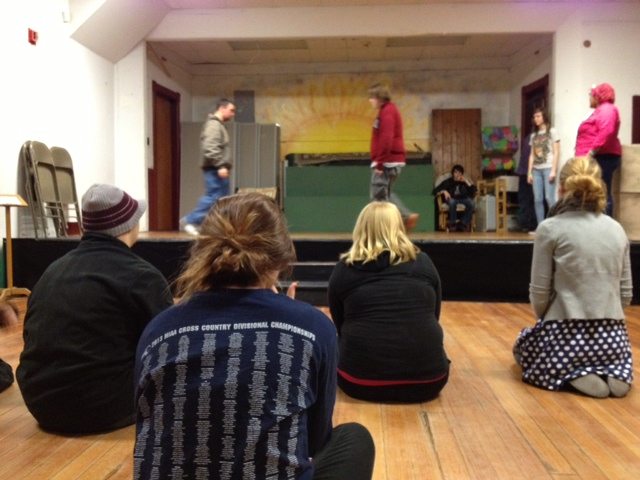 The groups divide. Choices emerge and are tried, retained, tossed away. Focus starts to lag, so Kate raises the stakes: each group has two minutes to make five tableaux. “Make it big. A journey of reaction,” she suggests. Next, dialogue is added, and then critiques.

In our last half hour, Kate introduces an exercise called “The Gift”. One by one, a small box, wrapped with shiny paper and a bow, is passed around. Inside that box is anything our hearts’ desire. We have to describe what is in the box, and why we need it.

Like fireworks, dreams explode out of the box. Some of them are practical and some of them are ephemeral, but all are deeply revealing and have taken this collective group, as one participant says, to a very different place than we were before.

It’s one young man’s 3rd year of PMP, and during break I ask him if it’s hard, this laying of emotions on the table. “All the time,” he says. So what keeps him coming back? “Being here gets my mind off other things. And I trust everyone here.”

In a closing circle, we offer final words and good wishes. “We believe in you,” Kate tells the group. Leandra says she is astounded by our journey to date, and what it portends about the possibilities ahead.

At the end of “Bad Wednesday”, cantankerous Mary Poppins extends the safety line of her invisible hand to Jane. It occurs to me that that is exactly what this small band of PMPers does for one another. High-five the brave risk-taker and cushion them should they fall hard.

Our group lingers longer than usual, but eventually, it’s time to leave.

And so they head out, into the dark and starry night.