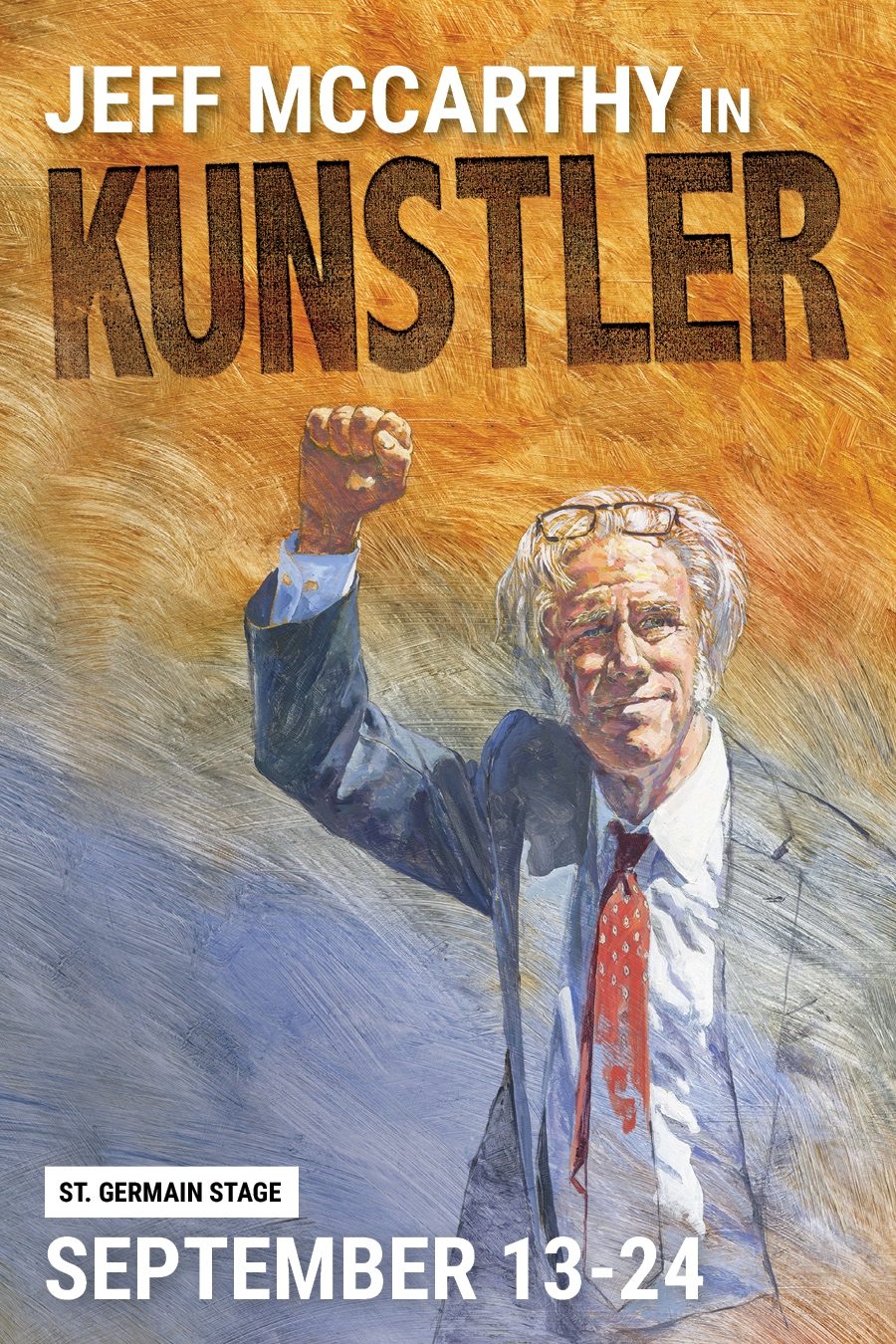 Sponsored by
Judith A. Sabot

BACK BY POPULAR DEMAND!
September 13-24

The 2017 St. Germain Stage Season is sponsored by the Claudia and Steven Perles Family Foundation.

“Jeff McCarthy is outstanding as Kunstler.”
– In the Spotlight

“Barrington Stage Company has started its summer season with a clear winner, a political drama with the heart of a situation comedy about trust and love and experience, those things that make up true conviction.”
– Berkshire Bright Focus

“A smart, funny, and very timely show…”
– The ArtsFuse

“This is a powerful production — part stand-up comedy, history lesson, sermon, and celebration of the human spirit. Sweet’s Kunstler has not lost the ability to stir an audience, and, as Roche’s character reveals, history has proven many of Kunstler’s insights and instincts to be correct.”
– CurtainUp

“A showman’s portrayal of a showman… Kunstler affords us the opportunity to witness the meeting of a master actor and a master litigator.”
– Berkshire On Stage

JEFF MCCARTHY (William Kunstler) has enjoyed a relationship of many years with Barrington Stage and is especially proud to be an Associate Artist. His work with Julianne Boyd includes Broadway Bounty Hunter, Man Of La Mancha, All My Sons, Sweeney Todd, Follies, Mack & Mabel. In New York: Southern Comfort, Chicago, Urinetown, Side Show, Zorba, Sympathetic Magic, Dream True, Smile, The Grinch Who…, Beauty And The Beast and several others. Other regional with Long Wharf, Arena, The Guthrie, Hartford Stage and many others: Kunstler (playing Off Broadway February 2016), A Lie Of The Mind, The Front Page, The Price, The Misanthrope, The Underpants, My Fair Lady and hundreds of others. TV: The Good Wife, Schweitzer (title role), Star Trek(s), Designing Women, Law And Order(s), Cheers and many others. Film: Starting Out In The Evening, Robocop 2, Consent, Eve Of Destruction, Cliffhanger and others.

MEAGEN FAY (Director) is an L.A. Critics Award-winning director of Private Stories, Public Schools as well as Future Boyfriend for the L.A. Sci-fest. She directed the 2014 NY Fringe Festival production of Kunstler and its recent sold-out run at 59E59th. As an actress Meagen has appeared on and off Broadway, is an alumna of The Second City in Chicago, has been a regular on TV on shows including Roseanne, Malcolm in the Middle and Homecourt and is currently a regular on Transparent, Good Girls Revolt and Shrink.

JEFFREY SWEET (Playwright) Jeffrey’s plays, including The Value of Names, The Action Against Sol Schumann, Bluff, Flyovers, American Enterprise and Court-Martial at Fort Devens, have been presented in Chicago, New York and around the country. Awards include prizes from the American Theatre Critics Association, the Jeff Award, the Audelco Award and an Outer Critics Circle Award. Books include Something Wonderful Right Away (about Second City), The O’Neill (about the O’Neill Center), The Dramatist’s Toolkit and What Playwrights Talk About When They Talk About Writing. He is a member of the Dramatists Guild and an alumnus of New Dramatists.

ELIVIA BOVENZI (Costume Designer) recently designed costumes for Kunstler Off Broadway at 59E59. At BSC: peerless and the upcoming production of The Birds. For New York Shakespeare Exchange: Much Ado About Nothing, The Rape of Lucrece, Hamlet, and Titus Andronicus.  She was an assistant costume designer for the Broadway revival of Fiddler on the Roof, and for MTC’s The Father and Incognito. Other assistant credits: Plenty (Public Theater), War Paint (Goodman Theatre) and Kiss Me Kate (Hartford Stage).  MFA: Yale, where her credits include An Accidental Death of an Anarchist (Yale Rep/Berkeley Rep), Cloud Nine and Richard II.  www.eliviabovenzi.com

WILL SEVERIN (Composer and Sound Designer) Will’s theatrical works are published by Samuel French, including PBS special A Tale of Cinderella. Film scores: Dorian Blues, Nate Dogg and The Outage. Producer/composer for award-winning audiobooks including Sherlock’s Secret Life and Hollowville: A Ghost Story. Will has composed music for clients Delta Sky Media, Coca-Cola, etc. Lead singer of Infinite Spectrum, whose latest release is Haunter of the Dark. Lead guitarist for fusion group Crazy Swedes. Partner in The Creatives/Handsome Spyder, a film production company, which released the H.P. Lovecraft-based feature, The Thing on the Doorstep. Co-founder of The Creative Place International.

MARY JANE HANSEN (Production Stage Manager) Playwright-actor-stage manager-director with plays produced regionally and internationally, including American Soup, Saratoga Chips, A Legend of Sleepy Hollow and Hollowville: An American Ghost Story. She wrote The Thing on the Doorstep, an award-winning psychological horror film, and The Outage, for which she won Best Actress in a Short at the Macabre Faire Film Fest. She is Artistic Director of The Creative Place International in residence at The National Museum of Dance, partner in Handome Spyder Productions, and earned her Masters in Dramatic Arts from Harvard University. She is a member of AEA, NYWIFT, and DGA. www.maryjanehansen.com

ANNY DEGANGE (Assistant Stage Manager) is a charter member of The Creative Place International (CPI), Anny recently reprised Maria Callas in Master Class and performed many roles in CPI’s last five seasons. At the New York State Theatre Institute, she was the Nurse in Romeo and Juliet, First Witch in Macbeth, the Abolitionist in Reunion and Martha Adams in 1776. On Broadway she was in Evita, Raggedy Ann, Rosa and Les Miserables. She has sung roles with the New York City Opera, Cleveland Opera and opera concerts in Europe, and has danced with The Martha Graham Dance Company. She teaches for CPI and The National Museum of Dance. Married to Ron Holgate and proud Mom to Chloe and Lily.

THE CREATIVE PLACE INTERNATIONAL IN ASSOCIATION WITH AND THEATRE CO. (Producer) William F. Snyder, Patricia B. Snyder and Kristine Niven are the Fringe, CPI, Off Broadway and Barrington Stage Producers of Kunstler. They will produce the Columbia Artists Theatricals National tour of the play with Jeff McCarthy in the 2018/19 season. Thank you, Barrington Stage! For information contact Gary McAvay. www.columbiaartiststheatricals.com 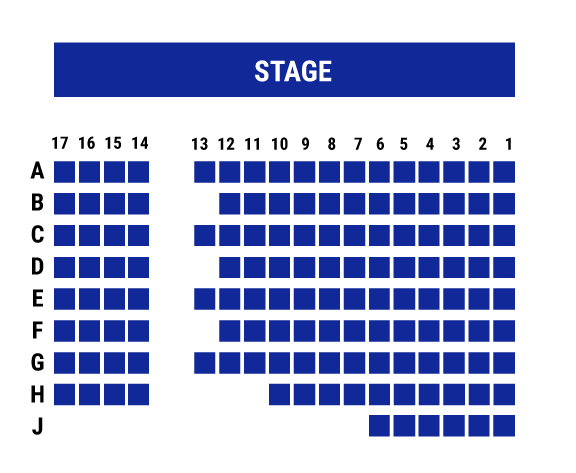