“Camping with Henry and Tom is a feast for the eyes.” – Westfield News

“Seeing this play, now, in this season of our political year, is a hysterically funny yet chilling experience.” –Berkshire Bright Focus

“This ripped from the headlines play has enormous audience appeal.” – Berkshire Fine Arts

“A night of back-room politics al fresco.” – The Berkshire Eagle

PJ BENJAMIN (Thomas Edison) PJ’s career spans 46 years, including seven years as the Wizard in the blockbuster Wicked on Broadway and on tour.  Five years he was lovable Mr. Cellophane in the Broadway hit Chicago. Other Broadway: Torch Song Trilogy; Sophisticated Ladies; Charlie And Algernon (LA Critics Award); Pippin; Sarava; The Pajama Game and Damn Yankees. PJ cut his teeth early on with the likes of Bob Fosse, George Abbott, Cab Calloway and the Duke Ellington Orchestra. He’s performed in over 100 productions with roles ranging from Joe Keller in All My Sons to Albin in La Cages Aux Folles. TV: Madam Secretary; Law And Order: SVU; Person Of Interest; Louie and is the voice of the Dodo birds in Ice Age. PJ and wife, actress Louisa Flaningam, own a log house museum on Chincoteague Island, Va. captaintimothyhillhouse.com

PATRICK HUSTED (Henry Ford) Patrick played Peter Stockman at BSC in An Enemy of the People. He is a veteran of over 150 stage productions, including NYC productions of the Pulitzer-winning play, Wit, Bill W. and Dr. Bob, and worked with Arthur Miller on his remake of The American Clock. Also, Joel Grey directed Patrick in On Borrowed Time. Recent films include The Immigrant with Marion Cotillard and Joaquin Phoenix, and The Place Beyond the Pines with Bradley Cooper. Patrick has appeared in numerous TV shows, most recently The Leftovers, Blacklist, Mozart in the Jungle, and The Family. He is the author of a memoir, Excavating Pieces: An American Childhood.

KEVIN O’ROURKE (Warren Harding) has performed on Broadway in Cat on a Hot Tin Roof, Spoils of War and Alone Together. Other stage credits include The City of Conversation at Lincoln Center, Perfect Arrangement at Primary Stages, and The Night Alive at John Drew; as well as productions at Manhattan Theatre Club, The Public, Second Stage, Playwrights Horizons, Roundabout, Long Wharf, and Williamstown Theatre Festival. TV/film credits include Outsiders, Veep, Remember Wenn, Sopranos, Law and Order, Boardwalk Empire (SAG award, ensemble), and the features Vice Versa, The Aviator, and Freeheld. As a director, Kevin staged the NY premiere of Abi Morgan’s Tender, Soldier at HERE Arts Center, and The Physicists at Williamstown Theatre Festival. For 10 years he was Artistic Director of the Williams College Summer Theatre Lab.

MARK ST. GERMAIN (Playwright) BSC Associate Artist. For BSC: Dancing Lessons (2014), Scott and Hem in the Garden of Allah (2013), Dr. Ruth, All the Way (2012), The Best of Enemies (2011), Freud’s Last Session(2009/2010), The Collyer Brothers/Period Piece (2008), The God Committee (2004), and Ears on A Beatle (2003). His most recent play, Relativity, was commissioned by the Florida Studio Theater and will open October 28th at TheaterWorks in Hartford starring Richard Dreyfuss. Freud’s Last Session became BSC’s longest running play and moved Off Broadway where it played for two years. Other plays include Out of Gas on Lover’s Leap, Camping with Henry and Tom (Outer Critics Circle Award and Lucille Lortel Award) and Forgiving Typhoid Mary. With John Markus, Mark wrote the musical comedy The Fabulous Lipitones. He most recently directed and produced the documentary My Dog, An Unconditional Love Story, featuring Richard Gere, Lynn Redgrave and Glenn Close among many others. With Randy Courts, he has written the musicals The Gifts of the Magi, Johnny Pye and the Foolkiller, winner of an AT&T “New Plays For The Nineties Award,” both produced at the Lamb’s Theater, NYC. Jack’s Holiday was produced at Playwrights Horizons. Mark’s musical, Stand By Your Man, The Tammy Wynette Story was created for Nashville’s Ryman Theater and has toured nationally. Mark wrote the children’s book Three Cups, illustrated by April Willy and published by Thomas Nelson. He is an alumnus of New Dramatists where he was given the Joe A. Callaway Award, a member of the Dramatists Guild and the Writer’s Guild East. Mark is also a Board Member at Barrington Stage Company.

CHRISTOPHER INNVAR (Director) Barrington Stage Associate Artist. Recent work includes directing Conor McPherson’s Shining City starring BSC favorite Mark H. Dold, and playing Walter Burns in John Guare’s adaptation of His Girl Friday. Chris directed Mark St. Germain’s The Collyer Brothers At Home/Period Piece at BSC in 2006 and is thrilled to be working on another of his plays. Upcoming: Chris will play Doc in Come Back Little Sheba with the Transport Group in NYC and his play Turtles will be published in a compilation for teens by Applause Books. Many thanks, as always to artistic director and BSC founder, Julianne Boyd.

BRAD BERRIDGE (Sound Designer) Over a dozen shows at BSC. Highlights: The Best of Enemies; The Crucible; A Streetcar Named Desire; To Kill A Mockingbird; The Whipping Man; Pool Boy; Presto Change-O, American Son. Off-Broadway: 13 Things About Ed Carpolotti (world premiere); Loot; Cactus Flower. Locally, many shows at Capital Repertory Theatre;highlights: Gypsy; The God Game (world premiere); A Christmas Carol; Other Desert Cites; The Secret Garden. Brad is an Associate Artist with WAM Theatre and has designed and composed music for nearly all of their local productions. Brad lives in the Berkshires with his wife, Ashley Berridge and their two children. www.bradberridge.com 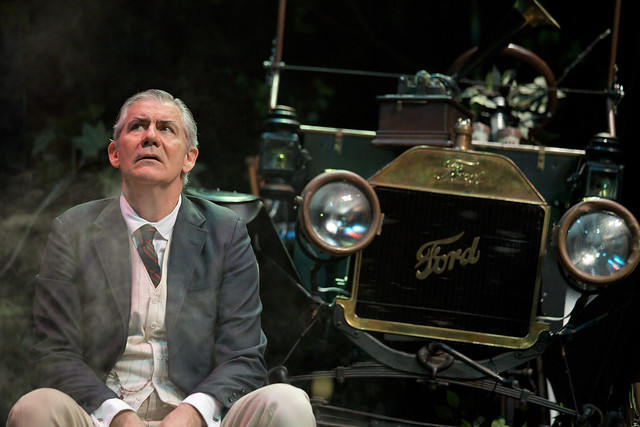 Playwright Mark St. Germain will discuss the personalities and hubris of presidential candidates in 1921 and how history repeats itself… 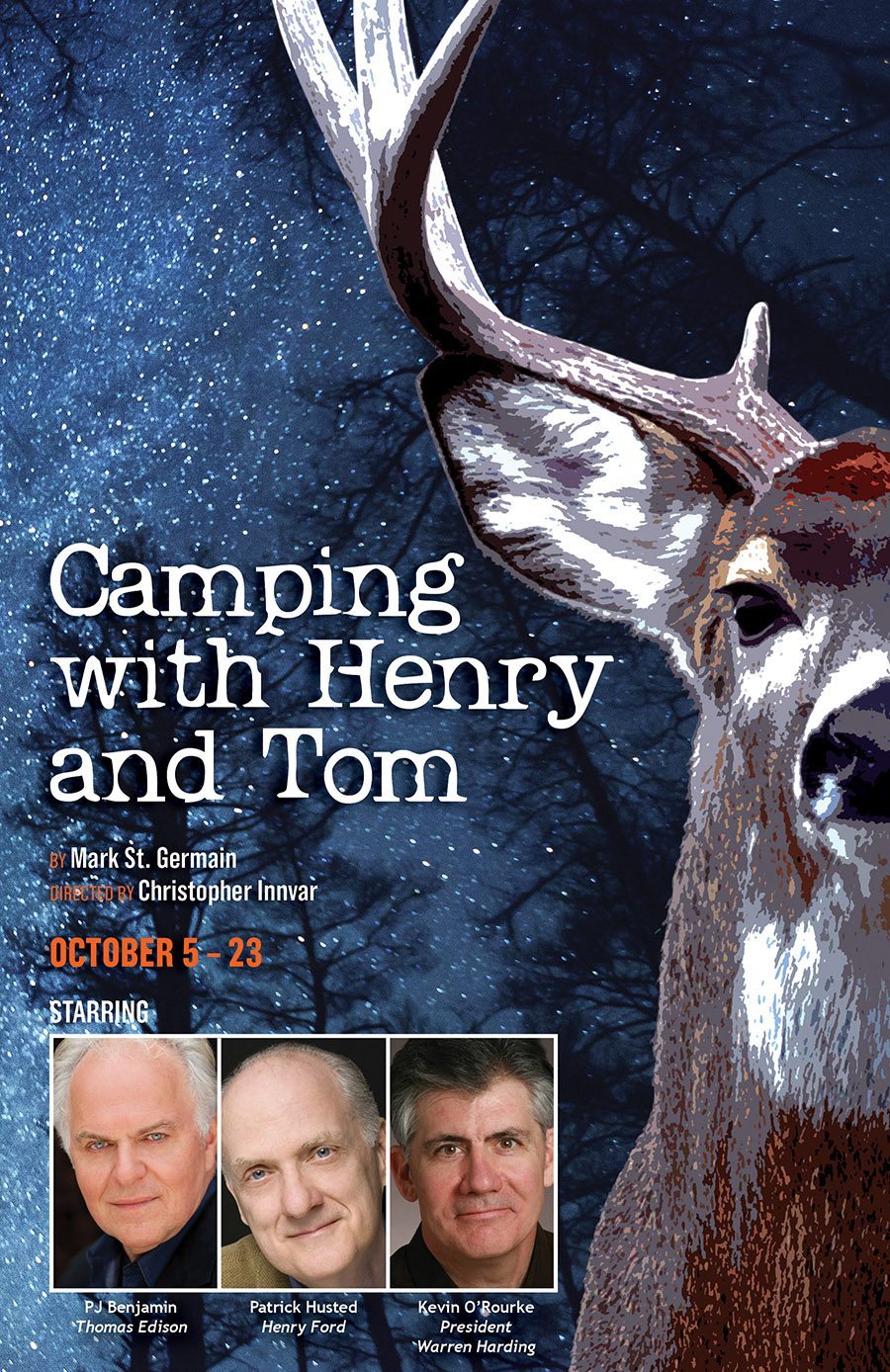 Sponsored by
Bonnie and Terry Burman

Camping with Henry and Tom

In 1921, Henry Ford, Thomas Edison and President Warren G. Harding took a camping trip together into the Maryland woods to escape civilization; what they couldn’t escape was each other. Inspired by an actual event, Camping with Henry and Tom is an exploration of friendship, politics and leadership—a comedic and dramatic clash of two great minds and one great heart  of the twentieth century.

Sponsored in part by The Dobbins Foundation & Richard Ziter, MD