Click here to view the program for The Wiz.

Jenna Benzinger (Lord High Underling) This is Jenna’s first time being apart of Barrington Stage’s Youth Theatre. Jenna will be a senior next year at Mount Greylock Regional High School. She has participated in two musicals at Mt. Greylock including South Pacific and Nice Work If You Can Get It as the Duchess of Woodford. Jenna also danced for ten years at Berkshire Dance Theatre. She also attended Long Lake Camp for the Arts for four years where she held key roles in the musicals Legally Blonde, The Wedding Singer, Hair, and Spamalot. Jenna is committed to Brown University for Basketball and plans to major in theatre while there. Lastly, she would like to thank her parents, John and Janice, and her brother, Jake, for supporting her in all of her endeavors.

De’Jhaun Bercy (Tin Man) is excited to join the company of this production as the “Tin Man”. He is currently a sophomore at the Springfield Central High School where he is taking courses in drama. In spring of 2016 De’Jhaun made his debut in acting with the school drama team in the play Chicago as Fred Casley. Although he is a novice as an actor De’Jhaun is no stranger to the stage. In 2011 he sang the Stephanie Mills version of “Home” from the movie The Wiz at the world renowned Apollo Theater. He also sang the National Anthem on multiple occasions at the MassMutual Center in Springfield, MA and on Channel 22 News’ Mass Appeal segment.

Maya Finston-Fox (Aunt Em) is thrilled to be returning to Barrington Stage Youth Theatre for her third year. Maya is a rising senior at Miss Halls School in Pittsfield, MA. Some of her credits include Our Town (MHS), Nice Work If You Can Get It (MHS), Hairspray (BSC), and Shrek the Musical (BSC). Maya would like to thank her moms for their love and support. Maya would also like to thank the cast and crew of The Wiz for their amazing talent and personalities. Being in The Wiz shines a light on how we can coexist in harmony.

Olivia Finston-Fox (Leader of the Winged Monkeys) is very excited to be doing her second show with Barrington Stage Youth Theatre. Her previous shows include Hairspray Jr. with BSC, and Peter Pan, Shrek the Musical, Henry V, Merry Wives of Windsor and many more outside. Olivia would like to thank her family for being so supportive. Most of all she would like to thank the cast of The Wiz for being accepting and understanding and just for being as wonderful and as fun as they are. Olivia is definitely proud to be a part of The Wiz.

Madeline Lukomski (The Wiz) is thrilled to be making her debut with BSC Youth Theatre! Favorite roles include Diana Morales (A Chorus Line), Rusty (Footloose), Sandy (Grease), Fritzie/Gorilla (Cabaret), and Chava (Fiddler on the Roof). Madeline is so excited to be attending NYU in the fall to study Musical Theatre, which is a dream that never would have become a reality if it weren’t for her supportive family. A special thank you to Mom, Dad, Grampy, Grammy, Ryan, and Billy…you have truly made “home” a place where there’s love overflowing.

Taylor Mickens (Dorothy), a rising senior at Springfield Central High School, is ecstatic to be making her BSC debut! Select previous credits include Chicago (Velma) and Shrek the Musical (Dragon/Swing). Taylor would like
to thank her incredibly supportive family and the talented cast and crew of The Wiz for such an amazing opportunity and experience.

Julianna Monteleone (Messenger) is thrilled to join the cast of The Wiz for her first summer with BSC. She is a rising freshman at Lenox Memorial High School and studies voice and piano at The Berkshire Music School. Favorite past shows include You’re A Good Man Charlie Brown (LMMHS), The Little Mermaid (French Woods Festival), The Tempest and Twelfth Night (Shakespeare and Co.). Julie would like to thank her family and friends for their endless love and support.

Brianna Nicola (Evillene/Glinda) is honored to be a part of this production of The Wiz. Brianna just finished freshman year at Pittsfield High School where she played Hope in her fall play Almost Maine, and Marcy Park in her spring musical The 25th Annual Putnam County Spelling Bee. Other credits include: Hairspray Jr. (BSC), Shrek the Musical (BSC), Closer Than Ever (PHS). Special thanks to Brianna’s parents for supporting everything she does, and Christine O’Grady for helping her find her dream.

Noah Pott (Royal Gatekeeper) is thrilled to be returning to BSC for his second year. Previous performances include Shrek the Musical (Big Bad Wolf and Thelonius), The Tempest (Ferdinand), Much Ado About Nothing (Benedick), Seussical (Vlad Vladikoff), A Mid-Summer Night’s Dream (Demetrius), Grease (Eugene), Peter Pan (John), Oliver!, and A Christmas Carol. Noah is a rising junior at Berkshire Waldorf High School and is grateful to be a part of this incredible team.

Evan Silverstein (Lion) is super excited to make his Barrington Stage debut in The Wiz. Evan attends Lenox Memorial High School and is preparing for his junior year. He became interested in theater two years ago through originating the comedy improv troupe, The Poorly Timed Sneezes. He would be Lion if he said he was completely self-reliant. Special thanks to his wonderful family, friends, and positive influences of any sort.

Courtney Stewart (Scarecrow) is thrilled to be spending yet another season with Barrington Stage Company and honored to be in the cast of The Wiz! Past BSC credits include: Seaweed (Hairspray) and Donkey (Shrek the Musical). Other favorite credits include: Piraguero (In the Heights), Romeo (Romeo and Juliet), Shrek (Shrek the Musical), Antony (Antony and Cleopatra), Nick Bottom (A Midsummer Night’s Dream), Andre (Some Other Kid), Billy Flynn (Chicago). He’d like to give a special thank you to Christine O’Grady Roberts, his family and Brianna and Naomi Nicola! @thekinglycourt.

Gabrielle D. Straight (Addaperle) is excited to return to BSC since being seen as Tracy Turnblad (Hairspray) and Mama Ogre/Stick Pig/Duloc Performer (Shrek the Musical)! Select credits include: Gary Coleman/Lucy (Avenue Q), Narrator (Joseph…Dreamcoat), Baker’s Wife (Into the Woods), Smitty (How To Succeed), Annie (Annie), Sir Toby (Twelfth Night), King Claudius (Hamlet). A 2016 graduate of Lenox, she will pursue a degree in Musical Theater this fall. Thanks family/friends for always supporting her, Christine and BSC for another amazing opportunity!

Aleah Tarjick (Ensemble) is trilled to be apart of the cast of The Wiz.
Special thanks go out to: Melissa and Dave Tarjick (parents), Patti and Pete Franceour (grandparents), also the whole Wiz cast. Currently a Hoosac Valley Middle School student on summer break, Aleah is so happy to be filling roles in the BSC production of The Wiz. Aleah enjoys playing sports, like basketball, soccer, and track.

Luke McGinnis (Music Director) is a New York City based music director. Recent credits include Broadway’s Future Songbook Series presents Alex Sage Oyen at Lincoln Center (Music Director and Arranger), Full House The Musical (Associate Music Director) and I’ll Be Home for Christmas at the Ivoryton Playhouse (Music Director). A million thanks to the beautiful cast, band and creative team: THANK YOU for the Inspiration, the Support, the Fun and the Love.

Haley MILLER (Production Stage Manager) Previously a BSC Stage Management Intern who assisted on Kiss Me, Kate, Breaking the Code and Dancing Lessons. Haley is thrilled to be back functioning as the Youth Theatre Production Stage Manager for The Wiz after her time with Shrek the Musical last summer. Haley is a student at the University of Southern California where she has stage managed Anna in the Tropics, Six Degrees of Separation, Kokoro, Crumbs From The Table of Joy, Our Town and others. Additional credits include: A Little Night Music (TD), Marisol (LD), Breath, Boom (LD)., To Gillian on her 37th Birthday (TD) and many more.

Natalie SALA (Associate Director/Co-Choreographer) is thrilled to be back at BSC for her 9th season. BSC: Associate Director/Choreographer, Shrek the Musical, Hairspray Jr., The Little Mermaid, Disney’s Beauty and the Beast, All Shook Up. RIYT: The Outcast of Sherwood Forest. Community Theater: assistant to the producer RENT, assistant choreographer in The Producers. Thank you, Christine, for the incredible run!

Tim Pare (Director of Education) joined Barrington Stage in August 2015. Prior to joining BSC, Tim was the Education Director for Lake Dillon Theatre Company in Colorado.  As an educator, Tim has worked with the education programs at Cohoes Music Hall (NY), Warren Consolidated School of Performing Arts (MI), Arts Academy in the Woods (MI), STREB Action Lab’s SLAM (NY), Stagedoor Manor (NY), Granbury Opera House (TX), Little Theatre on the Square (IL) and The Co-op School (NY). A graduate of Michigan State University, he has also worked creatively as a writer, director, choreographer and performer all over the country. 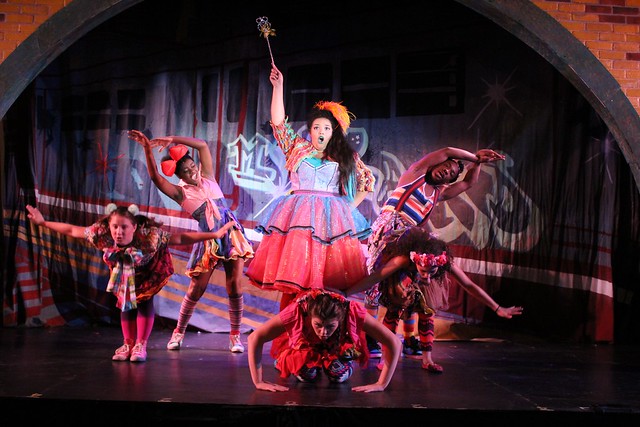 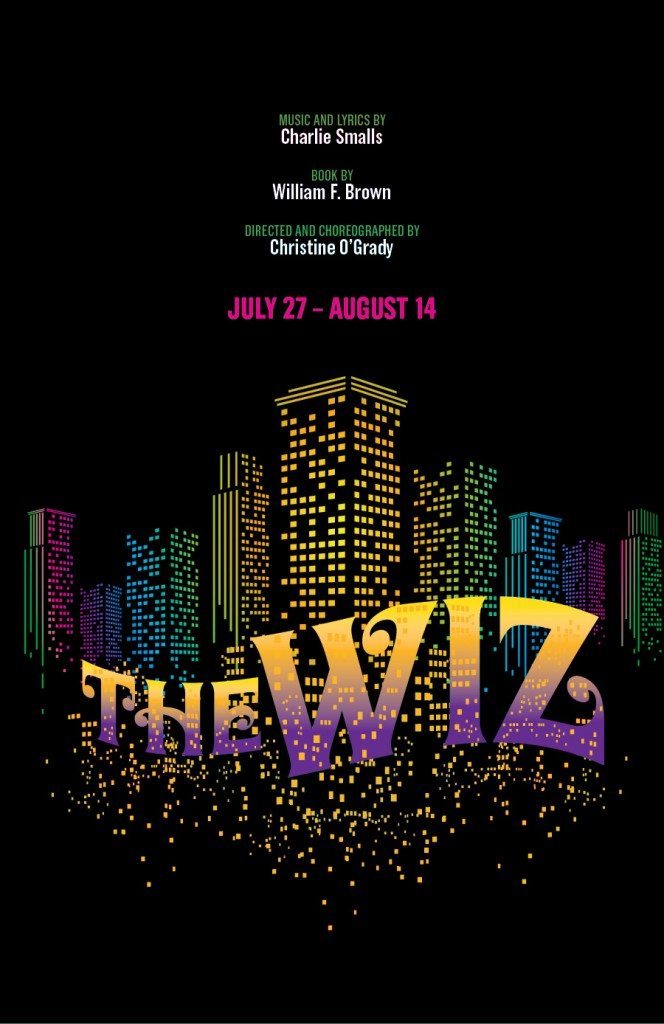 The Wiz is a glorious musical retelling of L. Frank Baum’s The Wonderful Wizard of Oz, with a book by William F. Brown and an infectious, funky and soulful score by Charlie Smalls. The Wiz brings a renewed relevance to a timeless American classic. It’s blazing with high spirits and sizzling with vitality.

Sponsored in part by
The Berkshire Eagle