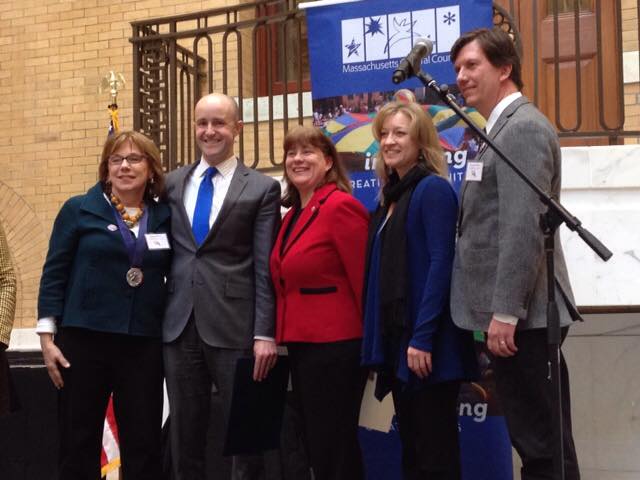 (PITTSFIELD, MA)— Barrington Stage Company, under the leadership of Artistic Director Julianne Boyd and Managing Director Tristan Wilson, was awarded a 2015 Commonwealth Award for Creative Youth Development on February 24 at the State House in Boston.

Presented by the Massachusetts Cultural Council, the Commonwealth Awards’ Creative Youth Development Award is presented to an individual, school, or cultural organization that has demonstrated the importance of creative expression to the lives of young people.  Barrington Stage Company was awarded for its range of quality programs that introduce children and adolescents to the power and joy of live theater.

“We are deeply honored to have received the Commonwealth Award for our Education Programs, most notably our Playwright Mentoring Project for underserved youth. These programs are the heart and soul of Barrington Stage and we are thrilled they have been recognized by the Massachusetts Cultural Council,” said Artistic Director Julianne Boyd.

“Once again the MCC is honored to shine a spotlight on the extraordinary institutions and individuals who make the Commonwealth’s cultural life the envy of our nation,” said MCC Executive Director Anita Walker. “Their achievements remind us that expanding the quality and availability of arts and cultural experiences to our citizens doesn’t happen by accident. It takes leadership, generosity, and a commitment to excellence.”

Presented biennially since 1993, the Commonwealth Awards honor the extraordinary contributions made by the arts, humanities, and sciences to education, economic vitality, and quality of life in Massachusetts. The Commonwealth Awards ceremony also bring leaders from the nonprofit cultural sector together to assert the sector’s value and make the case for public investment in its work. Past winners include leading artists and scholars such as Yo-Yo Ma, Olympia Dukakis, and David McCullough; world-renowned institutions like Jacob’s Pillow Dance Festival and the Peabody Essex Museum; and communities like Pittsfield, Barnstable, and Lowell that have made arts and culture central to their revitalization efforts.

About the Massachusetts Cultural Council

The MCC is a state agency supporting the arts, sciences, and humanities, to improve the quality of life in Massachusetts and its communities. It pursues its mission through grants, services, and advocacy for nonprofit cultural organizations, schools, communities, and artists. MCC’s total budget for this fiscal year is $13.5 million, which includes a $12 million state appropriation and grants from the National Endowment for the Arts. MCC also runs the Massachusetts Cultural Facilities Fund in partnership with MassDevelopment.

Barrington Stage Company, a professional award-winning Equity regional theatre located in the heart of the Berkshires, in Pittsfield, MA, was co-founded in 1995 by Artistic Director Julianne Boyd. Barrington Stage’s mission is three-fold: to present top-notch, compelling work; to develop new plays and musicals; and to find fresh, bold ways to bringing new audiences into the theatre—especially young people.  Barrington Stage garnered national attention in 2004 when it premiered William Finn and Rachel Sheinkin’s musical hit The 25th Annual Putnam County Spelling Bee, which later transferred to Broadway, where it won two Tony Awards. In 2009/2010 Barrington Stage produced the world premiere of Mark St. Germain’s Freud’s Last Session, which later moved Off-Broadway and played for two years. St. Germain’s Becoming Dr. Ruth (which premiered at BSC as Dr. Ruth, All the Way in 2012) played Off-Broadway at the Westside Theatre in fall 2013. BSC’s all-time record-breaking musical, On the Town, originally presented in 2013, is currently on Broadway with BSC as a co-producer. Barrington Stage was voted “Best Live Theatre” by The Berkshire Eagle readers in 2011 and 2012 and was named “Best Theatre Company” in Metroland’s Best of the Capital Region 2009-2012.