2016 WORLD PREMIERE on the Boyd-Quinson Mainstage

Click here to view the program.
“…searing production….It gets our highest recommendation.” – Berkshire On Stage and Screen

“….this is a new play with a definite future. This is a rare chance to be in on the first stage of that journey, a trip worth taking in a runaway bus of reality and emotional tremors, even with its heavy human toll.” – Berkshire Bright Focus

“The play is about achievement and pressure, parenting and policing, rebellion, and the lasting effects of racism.” – WAMC

Andre Ware (Lt. John Stokes) Hailing from Kalamazoo, MI (yes, it really does exist), André has had a love and passion for theatre ever since portraying ‘Bernardo’ in his high school’s production of Westside Story. He’s been Blessed! as an actor to have a career working in television, film and voice-overs… but Theatre is the thing that evokes all of our thoughts, hopes and dreams.  He is honored and grateful to be a part of this American Son production and a big heartfelt “Thank You!” to Julianne, Christopher, Rhoda, and the entire Barrington Stage Company for this wonderful opportunity to “live” on stage.

He is also a recipient of the Laurents/Hatcher Award (2016), two Carbonell Awards (South Florida) and three Silver Palm Awards (South Florida) for playwriting. Chris is a graduate of Dartmouth College and The Fletcher School of Law and Diplomacy. He and his wife, Stephanie, are co-founders of Zoetic Stage, an award-winning theatre in residence at The Adrienne Arsht Center for the Performing Arts in Miami, Florida.

Julianne Boyd (Director) Julianne Boyd co-founded the Barrington Stage Company (BSC) in January 1995. She has directed many productions at BSC, including the world premieres of Mark St. Germain’s Dancing Lessons, Dr. Ruth, All the Way and Best of Enemies. She also directed the critically acclaimed productions of An Enemy of the People, Much Ado About Nothing, The Crucible, Sweeney Todd: The Demon Barber of Fleet Street, A Streetcar Named Desire, West Side Story, Follies, The Game, Mack and Mabel, Cyrano de Bergerac and The Importance of Being Earnest. In 1997 she directed BSC’s smash hit production of Cabaret, which won six Boston Theatre Critics Awards and transferred to the Hasty Pudding Theatre in Cambridge for an extended run.

Ms. Boyd conceived and directed the Broadway musical Eubie!, a show based on the music of Eubie Blake which starred Gregory Hines and garnered three Tony nominations.  Ms. Boyd also conceived and directed (along with Joan Micklin Silver) the award-winning (Outer Critics Award, Best Musical) Off Broadway musical revue A…My Name Is Alice and its sequel A…My Name Is Still Alice.  She has worked extensively in New York and in regional theatres, including the Old Globe Theatre, the McCarter Theatre, La Jolla Playhouse, the Coconut Grove Playhouse and Syracuse Stage.

From 1992 to 1998 Ms. Boyd served as President of the Society of Stage Directors and Choreographers, the national union representing professional directors and choreographers in the U.S.

Brad Berridge (Sound Designer) Over a dozen shows at BSC. Highlights: The Best of Enemies, The Crucible, A Streetcar Names Desire, To Kill A Mockingbird, The Whipping Man, Pool Boy. Off-Broadway: 13 Things About Ed Carpolotti (world premiere), Loot, Cactus Flower. Locally, many shows at Capital Repertory Theatre; highlights: Gypsy, The God Game (world premiere), A Christmas Carol, Other Desert Cites, The Secret Garden. Brad is an Associate Artist with WAM Theatre and has designed and composed music for nearly all of their local productions. Brad lives in the Berkshires with his wife, Ashley Berridge and their two children. www.bradberridge.com

Natasha Sinha (Dramaturg) Currently Associate Director of LCT3/Lincoln Center Theater, producing War by Branden Jacobs-Jenkins. Before LCT3, she was the Associate Producer at Barrington Stage Company. Natasha is a co-founder of the new collective Beehive Dramaturgy, and she is on the Advisory Boards of SPACE on Ryder Farm and Musical Theatre Factory. Past freelance projects include Post-Op by Shakina, FEM (an evening of works-in-progress at JACK), and Sam Salmond’s Stand Alone: Songs About and Written By Losers. Natasha has served as a judge on various committees, taught classes (New School, Primary Stages ESPA, Marymount), and worked at Lark Play Development Center and Daryl Roth Theatre. Barnard College (Music, English). 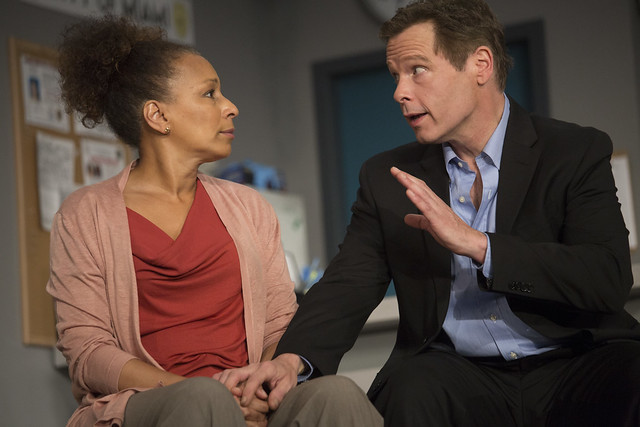 Conversation with Playwright Christopher Demos-Brown:
The Power of Drama in Discussing Social Issues

The playwright will discuss how race and bias affected his writing of American Son
and how he hopes the ideas in the play will encourage an open and meaningful dialogue in the community.

Must call the Box Office for reservations. 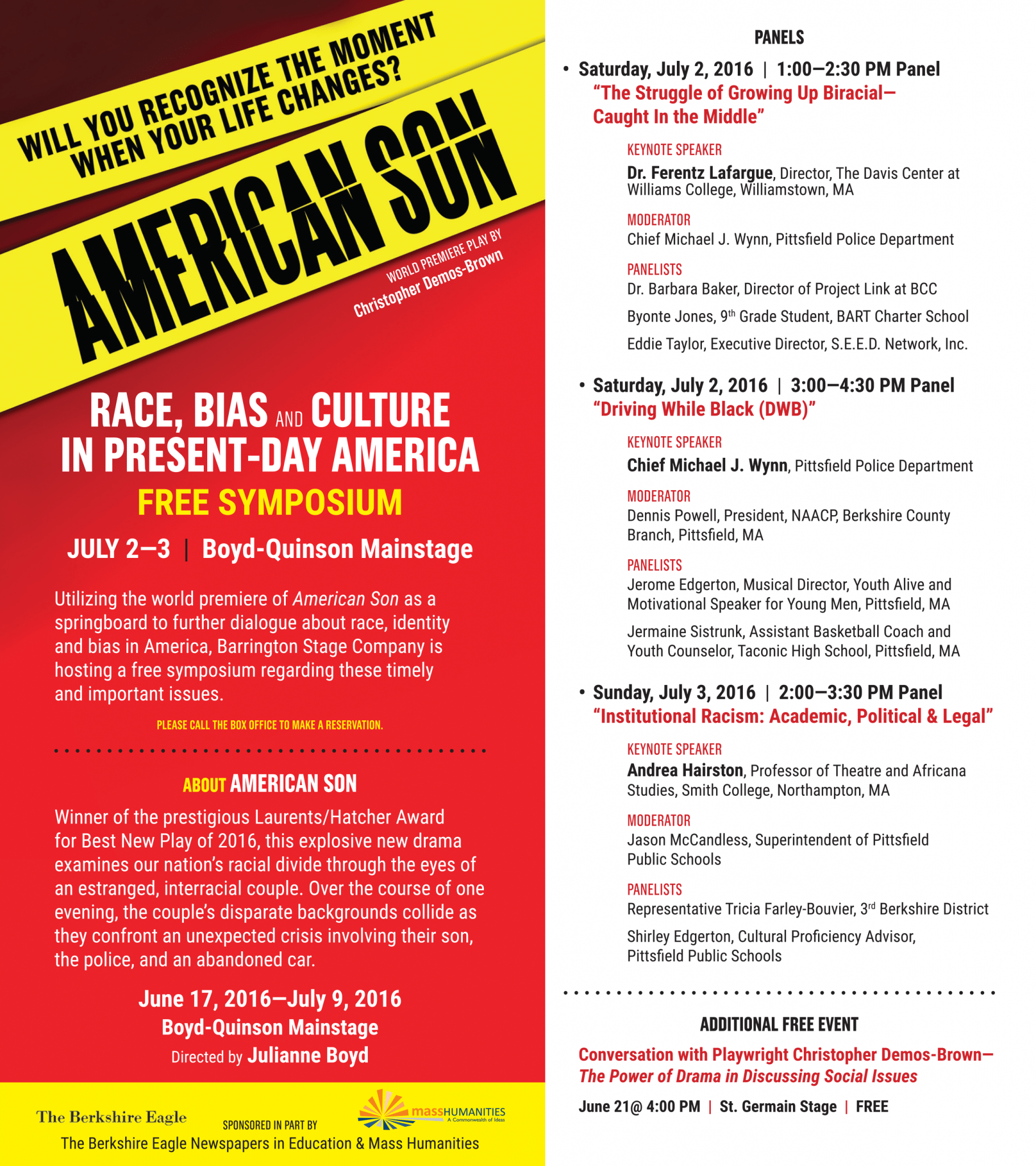 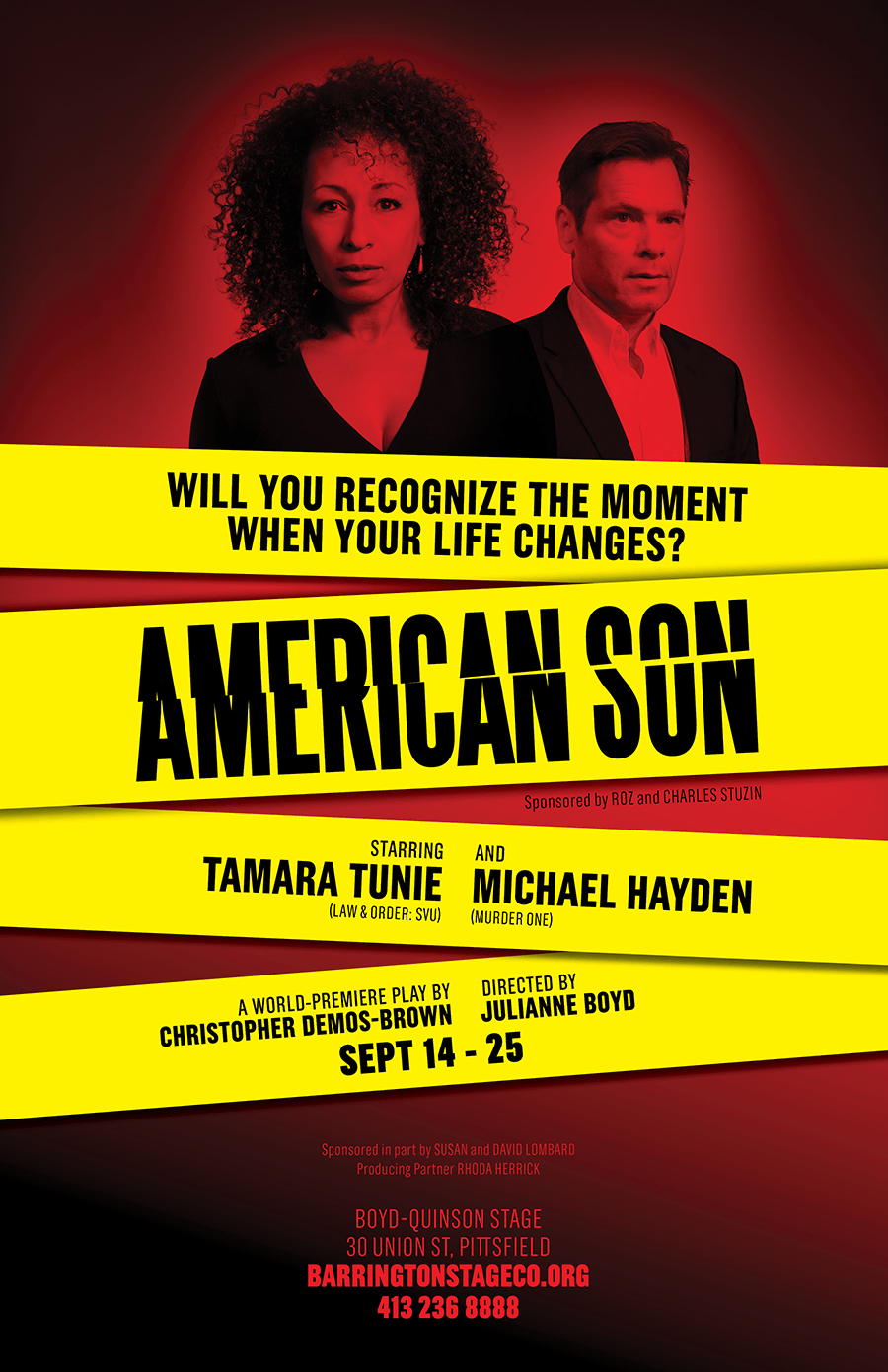 Sponsored by
Roz and Charles Stuzin

Winner of the prestigious Laurents/Hatcher Award for Best New Play of 2016, this explosive new drama examines our nation’s racial divide through the eyes of an estranged, interracial couple. Over the course of one evening, the couple’s disparate backgrounds collide as they confront an unexpected crisis involving their son, the police, and an abandoned car.

Sponsored in part by
Susan and David Lombard

90 minutes with no intermission.